Behind the cliffs the vegetation is characteristic of the gariga (scattered low bushes and bare rocky areas), composed of plants which are resistant to wind and sea spray. These species are adapted to extreme conditions and their powerful scent fills the air around the cliffs. Further inland the vegetation is more typical of the macchia, the more widespread Mediterranean scrub, forming low cover and including species such as myrtle, rosemary and broom. Some of the small endemic plants are particularly colourful. Even further inland, and more sheltered from the strong winds of the mistral, there are remnants of old pine woods, Aleppo Pines, which on this island represent the most developed evolutionary phase of the Mediterranean vegetation.

Besides its special environmental features and the wide variety of plants there, Carloforte Reserve is an important place for a great many bird species to rest and to breed. The rarest and most important of these is Eleonora’s Falcon, a raptor which breeds exclusively on cliffs, high above the sea, on islands in the Mediterranean. It is a symbol of this reserve, which was specially established in order to guarantee its conservation and protection. Every year about 100 pairs arrive from Madagascar (where they overwinter) to breed on the island of San Pietro and, in summer, the cliffs of the reserve are alive with the calls and aerobatics of this fine raptor. For many years LIPU has organised a surveillance and study camp, aimed at preventing the extinction of the species due to the illegal shooting which used to occur. There are other raptor species in the reserve, Kestrels, Common Buzzards and Peregrine Falcons. Circling above the clear blue sea are very rare Audouin’s Gulls, another typical species of Mediterranean islands, and Shags, perched on rocks and fishing offshore, also catch our attention. Among the dense bushes of the Mediterranean macchia a noteworthy variety of small birds take refuge: Sardinian Warblers, Dartford Warblers, Marmora’s Warblers and Sub-alpine Warblers. From their perches on isolated rocks can be heard the melodious warbling song of Blue Rock Thrushes.

Carloforte Reserve is also a precious haven for several other rare and localised animal species. In caves and wetter areas there is an endemic species of amphibian, and in dry sunny areas there are elusive colonies of yellow-green snakes. Towards nightfall rabbits appear among the bushes and several species of bats flit about the cliffs, rocks and pines.

Carloforte Reserve was established by collaboration between the Province of Cagliari, the Commune of Carloforte and LIPU. 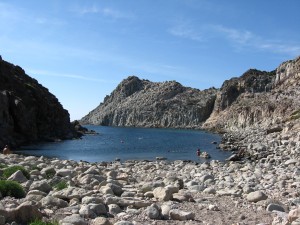